It’s hard to believe a whole month has passed since Charity was born!! She is such a good baby! From day one she hasn’t given us a problem! She only fusses for the usual reasons new babies do. (and if anyone knows our Leah, you know this is a TRUE blessing! haha) So we really can’t complain!

I know when I’m nearing a delivery of my baby, I don’t know why, but I love to read birth stories! I’m always curious about other women’s experiences…good and bad! So for anyone interested, here it is!

If you’re not…there’s at least some pictures of a cute baby at the bottom! 😉

My due date was Oct. 13. That day came and went and it seemed like she would never come! The doctors were talking induction about 2 days after my due date. I personally just never wanted to do that unless the baby was in real critical danger, which thank the Lord was never the case with any of mine. So I kept insisting I didn’t want that.

I went to the doctors Oct. 23rd and I kept insisting that the last two deliveries went great, I always do fine, they needed to just let me go on my own. They wanted me to go in for an induction that night!! I said I couldn’t because Caleb couldn’t make it. I told them if I HAD to be induced it would have to be Thursday. Sure enough…they scheduled me in for Thursday morning at 7 am. I was not thrilled. I couldn’t sleep well Tuesday night just worrying something might go wrong. I just kept praying (a lot) that’d I’d go into labor before then! I didn’t understand why she hadn’t come by now anyway! haha

Wednesday I was praying all day! I was walking circles around my downstairs trying to walk her out! (again!) I started to feel contractions and it wasn’t like my previous false alarms. I knew THIS WAS IT. Any of you who’ve had babies know that when it’s the real thing you know! ha! I texted my husband around 2:30 pm. and told him that I was having contractions about 15 minutes apart and wasn’t sure if we’d be going to church. (it was a Wednesday) My sister-in-law was to take the older girls when I went into labor so I gave her the heads up too!

I don’t know why, but Caleb and I still planned on going to church even though my contractions were now 10 minutes apart. This is commitment people☺ we gave Hannah and Leah to my SIL and headed off to church! Thinking back now it was kind of dumb, but we didn’t know how fast things would progress and hindsight is 20/20 right?! haha We should’ve known though… both of my previous labor and deliveries never lasted more than 8 hrs!

We’re on the highway, headed to church with hospital bags and baby car seat in the back.  I have my handy contraction timer and they were 7-8 min apart and getting to where I can’t talk through them because I’m trying to focus on breathing!! Caleb said, “You’re gonna go in, play the piano if you can, then we’re rollin’!” I agreed that was a good idea. lol

We get to church, and the contractions were pretty bad…I’m trying to avoid making a big scene. I didn’t want too much attention or too many questions. Especially considering the fact I could barely walk 3 steps without bending over in pain and unable to talk! Everyone was really good though, didn’t need to talk too much. Church started at 6 and we were about 10 min early and I told Caleb I was going downstairs to use the restroom, then I’ll be up. (another method to avoiding excess conversation lol)

I came up the stairs and Caleb handed me my purse and said we were leaving because he told Pastor what was going on and he insisted we just go! haha It was a good thing too, even though we didn’t realize it at the time!

We got back home about 25 min later and contractions were about 5 min apart. I called the doctor and told them I was coming. Caleb was changing his clothes and then throwing our things in our other car. (still not sure why we had to switch cars) My contractions were SUPER painful at this point and I could feel a TON of pressure so I told him we need to go now. We were supposed to wait until the doctor called me back but I knew I didn’t have the time for that! haha

Caleb stopped at McDonald’s for a coffee before we went to the hospital. I don’t know why, but that’s become a ritual for us now! lol We sat in the hospital parking lot while Caleb downed a Big Mac’. While he was doing that, we discussed (in between contractions of course) what hair color we thought Charity might have and who she would look more like! Again…we didn’t realize how far things were progressing.  lol  By the way, she has blonde hair and definitely favors her daddy in looks!:)

We went into the hospital and checked in at 7:15. I happened to be the only one there so I was getting their full attention!

Now for the disappointing factor of the whole thing…

I’ve had 3 kids now in 3 years…and I know they say you forget the pain. But, I hadn’t spaced my kids out far enough to experience that! haha I had the first 2 without any pain medication or epidural and I didn’t want to do that this time! I just wanted to see what I was missing…these ladies talking about laughing and having a good time after getting their epidural…I wanted to experience that! So when I got there I asked the nurse right away what the likelihood of me getting an epidural was…she just sort of smirked and told me she’d have to check and see. Then she proceeded to tell me to just remember “they get a lot worse”. Which I’m not sure if she noticed my medical record or not….but I’ve done this twice and I know how it goes. Plus, I’m in pain and a little irritable and that’s not what you need to hear!

She immediately gets this surprised look on her face and then tells me she’s going to have the other nurse come in and check me. Which Caleb and I were not sure what that meant! So I gave her this really puzzled look and she said, ” I just want to make sure, but I’m pretty sure you’re 10 centimeters!”

The other nurse came in and checked me…sure enough. She stood up and about 2.5 seconds later my water broke…this show was definitely on the road.

I asked about the epidural when she came back in and confirmed I was fully dilated and my water broke and she said there was really no point. (Which I figured, but was still clinging to a hope I might have a chance!!) By the time the anesthesiologist came to the hospital and did the prep work, plus the 10-20 minutes for it to kick in I probably would have the baby by then. After she told me that I just looked at Caleb and started to cry (I was really wanting that epidural, ok??) I told him, “I can’t do it AGAIN!” lol

So I have no idea what time that was. Once we get to the hospital I sort of check out mentally and focus on what I’m doing and let everyone else do the rest! They had already called the doctor to come in by that point and she was on her way. I was fully dilated but for some reason, that urge to push just wasn’t there yet. Which is weird for me personally because usually, that happens when my water breaks or shortly before that. Everyone was waiting on me as soon as I thought I was ready to push..like I said I was the only one there that night.

The nurse suggested I try to turn on my side…I had never moved before…I’m usually the sit-tight-and-bare-it type when it comes to this lol But I tried it…NOT working! I was in so much more pain when I did that. So I attempted to roll back over onto my back and about half-way there it hit me…

I was ready to push!!

the doctor came in (they already had the room all set up) and I started to push. They didn’t even have time to break the bed down! About 2 pushes later…at 8:49 pm, Charity Sue Love was here! It happened so fast I was shocked. I remember them putting her on my chest and looking at Caleb and saying, “I can’t believe she’s on me already! It’s over!” 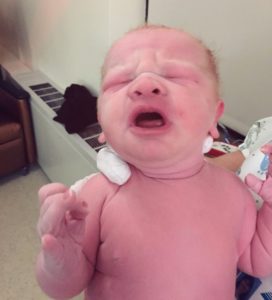 Mom was really praying I would go into labor before Thursday too because they were to leave for the Philippines the next morning at 6 am! So, of course, it would’ve been a bummer to miss the birth of a grandchild by one day! We told them as soon as she was born and they came down to the hospital right away!

Charity was by-far my easiest delivery yet! The nurse later told me after everything had settled down that I was only pushing for 4 minutes! Praise the Lord! haha

The Lord really blessed through the whole process and made it so easy for me. We found out that Charity’s umbilical cord was tied in a knot as well! The nurse said it was really rare and they called that a “true knot”. The doctor told us that a knot like that can usually cause a lot of complications and she was really surprised! The Lord is so good!! Charity was a perfectly healthy baby and we’re so grateful for another baby girl in our family!

You can find this swaddle here…

Here are some other pictures from our hospital stay. And the girls meeting their new baby sister!

You can find these adorable bow hats here…

I hope you enjoyed getting to read about all the happenings that day!! Happy Monday!