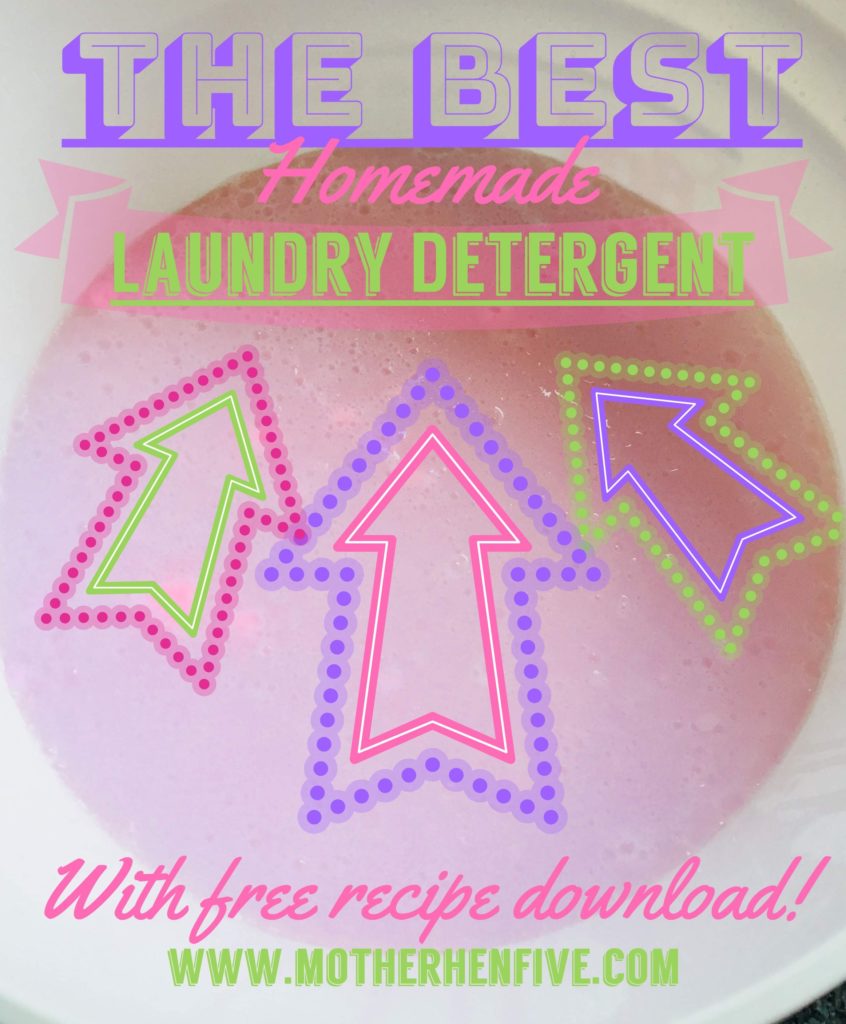 Ladies have any of you ever struggled with the price of laundry detergent?!? When I first got married I was constantly doing laundry. It’s so different doing multiple people’s laundry! ha! My husband worked construction at the time and worked with cement a lot. You just get filthy working construction anyway, but his pants would never get very clean!! It was so frustrating. While I knew his work clothes wouldn’t ever be spotless, it was annoying knowing that the laundry detergent I was spending A LOT of money on was not really working. Hannah’s baby spit-up and exploding diaper clothes, even when washed immediately, were stained permanently.

So….Pinterest is a wonderful thing, as we all know! I kept seeing homemade laundry detergent and decided I’d give it a try. Newly-wed, SAH wife, whose husband worked 12-13 hrs a day…what else did I have to do?;)

I have a FREE printable recipe for this stuff at the bottom, along with some information you’ll want to know about this 😉

First, I’ll explain why I love this so much! When I first made this detergent, my husband and I had just moved away from family (3 hours….but still!!) while his job moved out of town for a year so that we wouldn’t be separated all week, every week, for a whole year. Not for us! Plus, we just had Hannah! The closest Walmart was almost 45 minutes away in a BIG city…my husband didn’t like the idea of me going out with a newborn in a strange big city by myself. I didn’t enjoy it either (not a big city kinda’ girl)…when I have to get on and off a major highway more than twice I’m probably not going to be driving it myself. That’s what it took just to get to a Walmart! So trips to the store were limited. This didn’t require me leaving home so I liked that! Aaaaanyway…

My laundry I’m telling you was never cleaner. The stuff I bought at the store… I don’t know if I’ll ever go back. My whites were coming out WHITE!! It was a miracle. Hannah’s baby spit-up and diaper messes were washing right out. Brand new baby clothes with poop on them is a sad sight for any mom. lol This stuff took all the stains out and they still looked brand new!

Then there were Caleb’s work clothes…his jeans were actually coming CLEAN! His shirts weren’t getting dingier and dingier every week! This stuff can get a lot out. That’s my point. I’ve had people ask me about it and I always brag this stuff up!

I’ve been making it now for 2 years straight. I haven’t purchased laundry detergent in 2 YEARS! AND….I’ve only bought the ingredients to make this laundry detergent once. ONCE! (apart from the Fels Naptha Bar Soap which only last 3 batches. But it’s $1.24…..Come on!!)

You’ll need these 3 ingredients. Now, pictured below is NOT the Fels Naptha Soap (it’s ZOTE) which the recipe calls for. I was using this up because I had it and wanted it out of my cupboard. I HIGHLY RECOMMEND USING THE FELS NAPTHA. I think it’s a major factor in this miracle-working soap.

Take 1/3 of your Fels Naptha and grate it into 6 cups water. Heat on low heat until dissolved.

Once the soap is dissolved, put 1/2 cup of Borax and 1/2 cup Arm & Hammer Laundry Booster in the water. Keep on low heat and stir until dissolved.

This is everything dissolved and ready to go…

Now, get yourself a container that can hold I’d say at least 3 gallons. I just have a bucket. It works great!

Stir well and let sit overnight. This is what you’ll wake up to! It will have a layer of jello on top about 3-4 inches thick. Stir that all up…might take a little elbow grease. I use my electric handheld immersion blender that way it takes me no time at all! A handheld mixer or even a large whisk will work fine too!

And that’s it ladies…it’s super easy! Just give this a quick stir the first couple times you use it. After a while, it all blends together and you won’t have to stir!

The recipe card I scribbled out when I first found this was looking rough after spilling water on it and folding and throwing it in my laundry soap cabinet.

So, I made myself a new one! Made it prettier…and even laminated it! I know…..super fancy;)

You can have your own copy of this too! Print it out and try it for yourself!