Traveling with children can be stressful.  If you have ever done it, you will agree.  When I heard that Michelle and Paul were making a trip to Disney with two little ones, Nana wanted to do something to help.  It so happened that I was visiting them the week before they were taking off.  During the week that I was with them, we made two different “busy” activity toys . 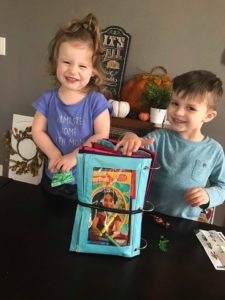 LEGO Box was our first project.  Michelle and I were and Walmart and we picked up a fishing tackle box organizer.  I hot-glued large LEGO pieces to half of the box.  You could even glue them on the lid. 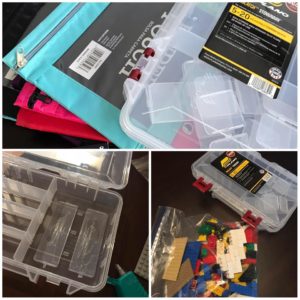 Silas and Callie had fun sorting through all the LEGOs and putting them in certain slots. 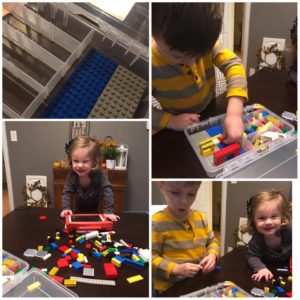 Our next project was a pouch with different activities in each pouch.  Again, we bought the pouches at Walmart for .98 each.

During the week we headed over to the dollar store to fill each pouch.

They enjoyed opening up the new things and putting them in the different pouches. 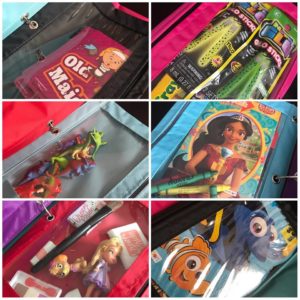 Some of the pouch themes were: 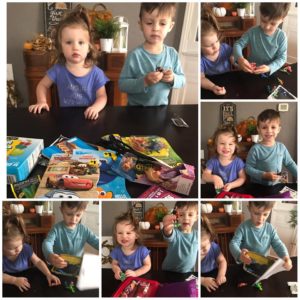 Instead of putting the pouches in an actual notebook, I bought rings in the stationery department to connect them all.  A 3-ring binder would be a little bulky on the plane.  I bought hair bands to rap around them to keep them together.

We went to the Dollar General for some of our activities, but we used the LEGOs that they already had. 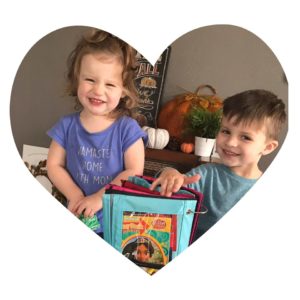 It’s not often I get to see Callie and Silas (they live in Milwaukee, WI), so I wanted to make a few memories while I was with them.

Have a great time and trip, Silas & Callie! Love you! 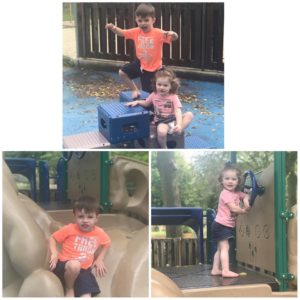